Several industry groups submitted comments in opposition to adding these PFAS chemicals to the Proposition 65 lists. For example, even though PFOS has been voluntarily phased out of production in the United States, the American Chemistry Council opposed listing PFOS as a carcinogen under Proposition 65, claiming that the available data doesn’t support a conclusion that PFOS presents a carcinogenic risk to humans.

Notwithstanding this industry opposition, on December 6, 2021, the CIC voted 8-2 with one abstention to add perfluorooctane sulfonate (PFOS) and its salt and transformation and degradation precursors to the Proposition 65 list of chemicals known to the State of California as causing cancer. It is important to note that PFOS had previously been on the Proposition 65 list due to its alleged reproductive toxicity.

Unlike PFAS, these particular PFAS chemicals have not been phased out and are used as processing aids in fluoropolymer manufacturing as well as in certain cosmetic products. As such, the inclusion of these chemicals on the Proposition 65 list will trigger new warning obligations.

These particular PFAS chemicals are commonly found in firefighting foam, stain-resistant fabrics, and food packaging. Companies that distribute and sell these types of products in California would be well served to evaluate whether their products contain any of these chemicals and take steps to either eliminate these chemicals from their products or ensure that the products have the requisite Proposition 65 warnings in the next year.

We will continue to provide updates regarding Proposition 65 at the Corporate Environmental Lawyer blog. 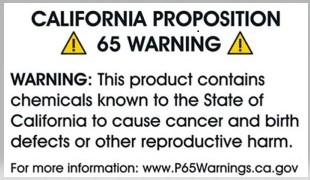 On the heels of a 2020 decision in National Association of Wheat Growers, et al. v. Becerra that barred the State of California from requiring Proposition 65 warnings for glyphosate-based pesticides because those warnings violated the First Amendment, another California District Court has thrown up a First Amendment roadblock for Proposition 65 claims relating to acrylamide in food and beverage products.  As explained in more detail below, on March 29, 2021, the District Court granted a preliminary injunction in favor of the California Chamber of Commerce (Chamber) barring future State and private party Proposition 65 lawsuits alleging a  failure to warn of acrylamide in food and beverage products.

The Chamber filed its lawsuit in October 2019 alleging that because the State did not “know” that eating food with acrylamide causes cancer in people, Proposition 65 violated the First Amendment because it mandated that businesses place warnings on food and beverage products stating that acrylamide is known to the State to cause cancer.  The Council for Education and Research on Toxics (CERT)--a nonprofit organization that frequently files private party Proposition 65 lawsuits--intervened in the matter.

The Court quickly dismissed CERT’s unconstitutional restraint argument noting that if the Chamber is correct that Proposition 65 lawsuits targeting acrylamide are violative of the First Amendment, then the lawsuit has an illegal objective and therefore can be enjoined without violating the First Amendment.  In considering whether the Chamber was likely to succeed on the merits of the complaint, the Court then proceeded to examine the Proposition 65 safe harbor warning which states as follows:  “Consuming this product can expose you to [acrylamide], which is … known to the State of California to cause cancer.”     After examining the scientific evidence presented to the Court, the Court found that the State had not shown that this warning was purely factual and uncontroversial.

Although the Court acknowledged that high exposure animal studies showed an increased incidence of cancer, dozens of epidemiological studies had failed to tie human cancer to a diet of food containing acrylamide.  After considering the competing expert testimony, the Court concluded that the “safe harbor warning is controversial because it elevates one side of a legitimately unresolved scientific debate about whether eating goods and drinks containing acrylamide increases risk of cancer.”  The Court recognized California’s substantial government interest in protecting the health and safety of consumers but concluded that at this stage of the litigation, the Chamber had shown that the Proposition 65 warning that the State demands does not directly advance that interest and is more extensive than necessary.

Finally, in evaluating whether the Chamber had demonstrated that it would suffer irreparable harm, the Court acknowledged the significant increase in Proposition 65 acrylamide pre-litigation notices and lawsuits over the past several years.  As the Court noted, irreparable harm is relatively easy to establish in a First Amendment case like this and this burden was met by the Chamber.   As such, the Court granted the Chamber's request for a preliminary injunction.

Again, it is important to note that this is just a preliminary injunction that bars future State and private party Proposition 65 acrylamide lawsuits while the case proceeds on the merits.  However, this decision, along with the 2020 Wheat Growers decision noted above, may evidence a willingness on the part of California courts to give serious credence to First Amendment challenges to Proposition 65 warning requirements and may represent a light at the end of the Proposition 65 tunnel for entities that sell food and beverage products in California (and this time, it may not be the light from a train).

On Tuesday, August 4, 2020, the California Environmental Protection Agency Office of Environmental Health Hazard Assessment (OEHHA) issued a Notice of Proposed Rulemaking to adopt amendments to the regulations implementing the Safe Drinking Water and Toxic Enforcement Act of 1986 (“Proposition 65”).  Specifically, OEHHA is proposing to amend Title 27 of the California Code of Regulations, by adopting a new Section 25505, to address listed chemicals formed by cooking or heat processing foods.  The proposed amendments, if adopted, would provide new, specific “safe harbor” levels for Proposition 65 listed chemicals that are caused by cooking or heat processing in certain food groups.  Manufacturers and sellers of these food products in California could then rely on these levels to demonstrate that their products do not require a consumer warning label under Proposition 65.

In general, Proposition 65 requires that parties manufacturing, distributing, or selling consumer products in California provide a “clear and reasonable warning” to the consumer whenever their product may expose the purchaser to a chemical that OEHHA has identified and listed as a carcinogen or reproductive toxin, unless an exception applies.  A key exemption to Proposition 65’s warning requirements includes where a consumer product will not exposure a consumer to a listed chemical in quantities above certain OEHHA-designated Safe Harbor Levels.  Safe Harbor Levels, which include No Significant Risk Levels (NSRLs) for cancer-causing chemicals and Maximum Allowable Dose Levels (MADLs) for chemicals causing reproductive toxicity, have been established for many of the chemicals listed under Proposition 65 and represent the maximum level of exposure to a chemical that has been deemed “safe” by OEHHA.  Products that expose consumers to chemicals at or below a designated Safe Harbor Level are not required to provide a warning label or otherwise warn consumers about potential exposure to the listed chemical in their product.  Critically, Proposition 65’s warning requirements are almost entirely forced through litigation brought by private party plaintiffs.  In 2018 alone, defendants paid over $35 million in settlements to private party plaintiffs, with over 75% going to attorneys’ fees.

Of particular significance to OEHHA’s proposed regulatory amendment is the Proposition 65 listed chemical acrylamide, which can often form in certain plant-based foods during high-temperature cooking processes, such as frying, roasting, or baking.  Acrylamide was first added as a Proposition 65 listed chemical in 1990 after studies showed it had the potential to produce cancer in laboratory mice.  Acrylamide was additionally listed as a reproductive toxin in February 2011, when OEHHA determined that the chemical could cause reproductive effects in mice.  Despite the relatively long period of time Acrylamide has been listed as a Proposition 65 regulated chemical, private party enforcement actions over the chemical have spiked heavily in recent years.  In response, on October 7, 2019, the California Chamber of Commerce filed suit in federal court against the California Attorney General, Xavier Becerra, seeking to block enforcement of Proposition 65’s warning requirements for foods containing acrylamide as the result of the normal cooking process.  The Chamber’s complaint alleged that more than 461 companies have received Proposition 65 notice of violations “in connection with alleged exposures to acrylamide in their food products over the past three years.”  The complaint further noted that the creation of acrylamide is an unavoidable effect of cooking many plant-based foods and that “there is a lack of reliable scientific evidence suggesting a causal relationship between acrylamide in food products and cancer risk in humans.”

OEHHA’s proposed regulatory amendment appears aimed at addressing the specific concerns asserted in the Chamber of Commerce litigation.  In its Statement of Reasons for the proposed amendments, OEHHA acknowledge that the regulatory amendment was needed because “some degree of formation of listed chemicals in many foods is unavoidable when the foods are cooked or otherwise processed with heat.”  In addition, OEHHA noted that the agency would consider adding additional food groups to the proposed regulations at a later date.

The proposed regulations provide that a Proposition 65 “exposure” does not occur where a listed chemical in a food product “was created by cooking or other heat processing” and “the producer, manufacturer, distributor, or holder of the food has utilized quality control measures that reduce the chemical to the lowest level currently feasible.”  In conjunction with this amendment, the amended regulations provide new Safe Harbor maximum concentration levels for listed chemicals in certain cooked or heated foods that are deemed by OEHHA to be the “lowest level currently feasible.”  Food products containing a listed chemical at or below the listed levels are not required to provide a warning under Proposition 65.  Listed food groups with specific new Safe Harbor Levels covered by the regulation include:

Notwithstanding the new proposed Safe Harbor Levels, the last sentence in new Section 25505(a) could still result in Proposition 65 claims.  The sentence provides “[i]f a person does not reduce the level of the chemical in a food to the lowest level currently feasible, the resulting exposure must be calculated without regard to the levels set out in subsection (d).”  Although this may not have been the intent of OEHHA, this language could be read to allow a Proposition 65 plaintiff to still claim that a manufacturer failed to utilize control measures that reduce the chemicals to the “lowest level currently feasible” even if below the Safe Harbor Level.  Hopefully OEHHA will clear up this potential ambiguity in any final rule.

We also note that while the newly proposed amendments may assist many potential defendants, the updated Safe Harbor Levels explicitly will not apply “to parties to an existing court-ordered settlement or final judgment to the extent that such settlement or judgment establishes a concentration of the chemical in a specific product covered in the settlement or judgment.”

OEHHA is currently accepting written comments concerning its proposed regulatory action and intends to close its comment period no later than October 6, 2020.  At present, OEHHA has not announced an intended final publication date for the proposed regulations, but the agency has noted that it anticipated its regulatory process may be delayed “due to the COVID-19 emergency.”